Thanks to the following newspapers for publishing two of my new op-eds!

In the news today and from the weekend…

I live and work in Jefferson City, MO. It is Missouri’s capital city, situated in the middle of the state on the banks of the Missouri River. It’s a sleepy river town, and a great place to live for families.

Late Wednesday evening just before midnight, a strong ECF 3 tornado tore through the center of town, leaving lots of devastation in its wake. My office building was in the middle of its path. It sustained fairly extensive damage to the roof and windows, but at this point it looks repairable. Others were not so fortunate. The furniture store right next to my building was almost totally destroyed. With all of the damage, it it a miracle that there were no fatalities. Our early warning system saved lives, if not property.

I live on the west edge of town, 3-4 miles from downtown. The sirens going off woke me up around 11:45 pm, and I quickly switched on the TV. One of our local meteorologists was imploring everyone in Jefferson City to move to their basements NOW. Luckily, my neighborhood escaped unscathed. Others were not so lucky.

One of the more intriguing things I have seen on Twitter is the rush to politicize the tragedy. One twitter post said: “Hey, climate change deniers, Jefferson City, Mo was just hit w a ef 4 maybe 5 tornado. When was the last time a mountainous river town had a tornado? Please stop #tornadojeffersoncity”. This tweet, and others like it, are just erroneous on so many levels. 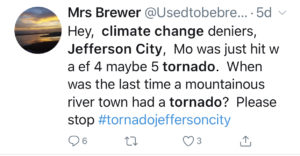 First, Jefferson City is not “mountainous.” The city’s elevation is 630 ft. It is hilly, but nowhere near mountainous. Second, tornadoes are not that rare around this area. Records indicate that since 1950, a total of 56 historical tornado events that had recorded magnitude of 2 or above have occurred in or near Jefferson City, MO. We are located right in the heart of Tornado Alley. Since it is a rural area, most tornadoes that occur here inflict minimal property damage–it’s when they hit populous areas that you see the terrible destruction.

We spend a lot of time on tornado emergency preparedness here in Jefferson City as well as in the entire state. We have a first-rate warning system. We also have monthly state-wide testing of the warning systems during the spring and summer months. Our schools run regular tornado drills, and have been doing so decades before there was any talk about “climate change.”

The point is, blaming climate change on this tornado event is irresponsible, in poor taste, and just plain wrong-headed.

Here in the heartland, we are a resilient bunch.  We face all kinds of extreme weather events–heat, cold, drought, floods, tornadoes, you name it. Blaming it all on “climate change” to score political points would be laughable if it wasn’t so tragic.

At City Journal, Mark Mills has written an excellent piece entitled, “Want an Energy Revolution?” Mark writes that it won’t come from renewables—which can never supply all the power we need—but from foundational scientific discoveries. It’s a great read.

In the news today and from the weekend…